If you have a question or comment about WCBE's new programming lineup, please call 614-365-6655 and leave us a message!
Arts + Life

Matt Fraction to speak at CCAD

Matt Fraction (Twitter) writes comic books and won the first-ever PEN USA Literary Award for Graphic Novels. His comic collaborations and solo projects have won Eisners, Harveys, and Eagles, with his signature piece, Sex Criminals winning TIME Magazine’s Best Comic of 2013. Other high profile projects include Hawkeye, The Invincible Iron Man, The Mighty Thor, The Uncanny X-Men, and Fantastic Four, among others. Matt Fraction will speak at the Columbus College Art and Design on Oct 23rd as part of their “Crafting Your Hustle” series, which highlights artists and writers who make a living from their craft.

Tune in for our discussion about comics, inspirations, and why he has to apologize frequently. 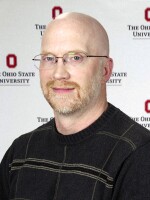 Doug Dangler
Descended from the giant sloths of the Ohio plains, Doug Dangler has spent his life pursuing Yeti and the perfect walnut-crusted cheeseball. He survives on twigs and berries in the wilds of Columbus, occasionally surfacing to conduct interviews with musicians, authors, and other creative types through a system of idiosyncratic grunts and whistles. But seriously, he’s a real person whose hobby is finding interesting people and having them talk about creativity. Dangler attended the University of Toledo, earning a BA in chemistry and biology. For nearly two decades, he’s managed the College of Arts and Sciences Digital Media Studio at The Ohio State University.
See stories by Doug Dangler