Every entrepreneur dreams of expanding their business from around the corner to around the world. While today those dreams look doubtful, hope can be found from the story of a CEO who managed to do so despite decades of economic downturns, near bankruptcy, and constant change. Robert Rosenberg joins the show today to share insights and lessons learned from his experience taking Dunkin’ Donuts from 100 shops to 6,500 outlets.  These lessons are also captured in his new book, Around the Corner to Around the World: A Dozen Lessons I Learned Running Dunkin Donuts.

Robert Rosenberg served as chief executive officer of Dunkin’ Donuts from 1963 until his retirement in 1998. Under his leadership, the company grew from a regional family business to one of America’s best known and loved brands. Rosenberg received his MBA from Harvard Business School, and in just weeks after graduating at the age of 25, assumed the position of chief executive officer. After retiring from Dunkin’, Rosenberg taught in the Graduate School at Babson College and served many years on the boards of directors of other leading food service companies, including Domino‘s Pizza and Sonic Restaurants. His book, AROUND THE CORNER TO AROUND THE WORLD: A Dozen Lessons I Learned Running Dunkin’ Donuts, describes how he took a company with 100 shops and $10 million in sales when he first became CEO, to 6500 outlets including Baskin Robbins Ice Cream Shops and nearly $2.5 billion in sales the year he retired. 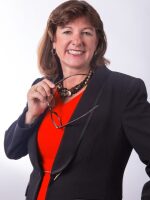 Maureen Metcalf
Maureen Metcalf, Founder, CEO, and Board Chair of Metcalf & Associates is a highly sought-after expert in anticipating and leveraging future business trends to transform organizations. She has captured her thirty years of experience and success in an award-winning series of books which are used by public, private and academic organizations to align company-wide strategy, systems and culture with innovative leadership techniques. As a preeminent change agent, Ms. Metcalf has set strategic direction and then transformed her client organizations to deliver significant business results such as increase profitability, cycle time reduction, improved quality, and increased employee effectiveness. For years, she has been willing to share her hard-won insights – through conference speaking, industry publications, radio talk-shows, and video presentations.
See stories by Maureen Metcalf
WCBE Podcast Experience
See stories by WCBE Podcast Experience