Tatum Flemister is the third recipient of the RRK Music Scholarship. The two previous winners are Robert “Rob” Dove (2009), a recent graduate of the University of North Carolina’s Miles Davis Institute and Sivan Silver Schwartz (2011),  who is currently attending Oberlin.

Mr. Flemister is a talented percussionist who also plays piano and trumpet. Tate is a 2013 graduate of the Columbus City Schools Fort Hayes Career Academy.  He will be attending Berklee College of Music in Boston this fall.  His twin goals are to compose jazz and play jazz professionally after graduating.

Ms. Kirk-Howell is the youngest sister of the well-regarded sightless saxophonist, multi-instrumentalist and Columbus native, the late  Rahsaan Roland Kirk.  One of Mr. Kirk’s last stated aspirations was to pass on the art of playing and composing jazz to young people so “America’s classical music,” as he dubbed it, would not be lost to future generations. 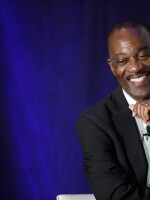